Today’s post has a decidedly different character.  While it is Civil War-related, it is most definitely not about the 11th Corps.  My original plan was to begin looking at the Sigel letter and putting it in the context of how this historian goes about analyzing a document.  That will be on the docket for next time, but this post will be of a slightly more personal nature and, but 24 hours ago, had inspired the title of this post.

Family history is one of my pursuits, and lately I have refocused my genealogical energies on the ancestors of my great-great-grandmother, Sarah Ann Rohrer Ford.  Her maiden name, of course, was Rohrer and her father Daniel was from the area around Rohrersville, a small community in Washington County, Maryland, a few miles southeast or so of the more famous community of Sharpsburg along Antietam Creek.  Digging into the prolific Rohrer family is a fascinating pursuit, and it intersected with the Civil War in a couple of ways this summer.  But my discovery of two cousins who served in the Potomac Home Brigade and another who served in the 2nd Missouri Cavalry (US) is not the subject of this post; neither is my somewhat tenuous genealogical connection to the semi-famous Mumma family of Sharpsburg.

At a meeting yesterday of an organization to which I belong, it was mentioned how two Union veterans are known to be buried in Green Hill Cemetery in Luray, Virginia.  Of course, I was already aware of this, but later in the day I did a bit of Internet searching to refresh my memory; this was made easier by the previous research of fellow blogger Robert Moore more than 10 years ago (!).  Robert H. Russell, one of the men buried in Green Hill, was a captain in the 66th Ohio Infantry and came to Luray after the war with his wife and went into business for himself.  I refuse to go into details about Captain Russell’s military career simply because Robert has already done a fantastic job at that both here and there (thank goodness old Geocities pages are still floating around the Internet) as well as a consolidated version on this page.

The serendipitous part of this story is that Robert Russell, an Ohio man who ended up in Savannah, Georgia, at the end of the war, eventually moved back to Ohio, then somehow found his way to a little place called… Rohrersville, Maryland, where he married… a Rohrer girl.  I probably had read this years ago when it was first published in the local newspaper, but I must not have traced my Rohrer line back to little Rohrersville by 2001, and suspected nothing of a family connection.  Few things in genealogy are certain, but, based on what I’ve found, there’s a fairly good chance that any Rohrer from Rohrersville is kin to each other somehow.

And, it turns out, Almira Rohrer Russell is a cousin.  Actually, she’s a first cousin of Daniel Rohrer, my great-great-great-grandfather, so Almira is really five times removed from me but it still counts.  I never knew.  That, my readers, is serendipity.

Of course, I made a point today to go to the cemetery and visit the Russell plot.  Almira’s stone looks good. 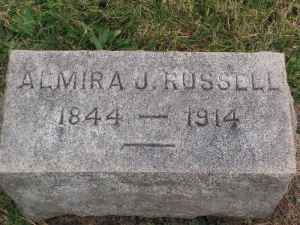 Robert’s is a bit lichen-y.

I think enough said for now.